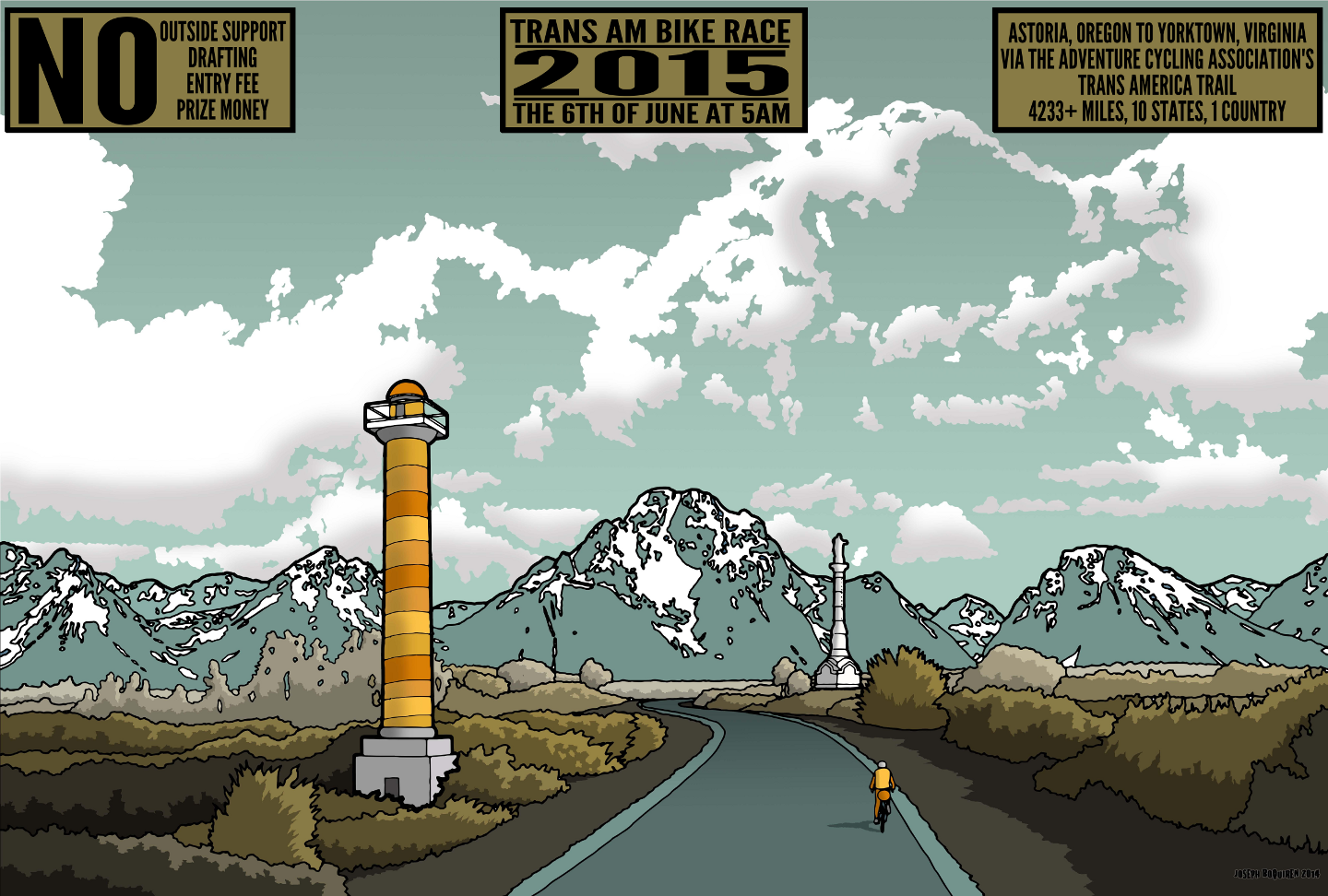 The time has finally come to do some bike touring with a sense of EXTREME urgency coast-to-coast across the U.S. from Astoria, Oregon to Yorktown, Virginia. A few of you have been asking for ways to track the race, so I thought I’d put this email together to give you some further info about the Trans America Bike Race.

The race kicks off at 5am Saturday morning (6 June). That’s 10pm on Saturday night for those of you on the eastern seaboard in Australia.

For those who don’t know, the Trans America Bike Race is a solo, unsupported race of about 6,800km. That means riders carry all the gear needed to survive. The course follows an established cycle touring route which is perhaps the most popular of its kind in the United States. It’s all on sealed roads too – something a bit different for me. The start features a coastal ride along the Pacific before heading into the mountains of Oregon, Idaho, Montana, Wyoming and Colorado. We’ll then have to battle 2,000km of flat, straight roads across hot, windy Kansas and Missouri (it’s still tornado season). The last section of the course through Illinois, Kentucky and Virginia consists of 1,000+km of short, steep rolling hills through the Ozarks and the Appalachian mountains before reaching the Atlantic. Hopefully I’ll get there in 2.5 weeks.

As far as I know I’m the only Aussie in the race this year, but the field seems to have a handful of international riders, all from Europe. It’s a new race; the inaugural event was last year. A movie, to be released later in June, was made about the event last year, so the list of starters will no doubt grow next year. 41 of us will kick off on Saturday.

This tour is a massive undertaking. It has been awesome to have support from so many friends back at home. Please jump on board and scream some virtual support at me and the other riders along the way. There will be so many reasons to quit or slow down every second of every day, so when I get a few minutes of WIFI at yet-another-Subway I’ll see messages and posts on Facebook and use them as motivation to push on! Feel free to forward this email along to others who might be interested as well… I’ll need all the support I can get to keep rolling!

Now… Onto the race tracking…

You can track the race at the following website. You can choose different map layers for a bit of a laugh. If you like, you can check out the weather radar to see how bad the conditions are. Feel free to sing out if I’m getting a little close to any tornados…
http://trackleaders.com/transam15

Riders are given a toll-free number to call to leave 3 min messages to update the world on how they’re going. The call-ins are posted on this site. Not sure how much I’ll use it, because it stays on the internet FOREVER, but I’ve had fun listening to call-ins in the past. There’s always one or two comedians…
http://mtbcast.com/
Or you can track them down on Facebook too.

I’m nervous, excited and perhaps still in a state of denial but wish me luck! Here’s hoping all the riders have a safe tour.

To all of the 2015 Trans Am Bike Race participants, have a great ride!
The Mount Skidmore Team.